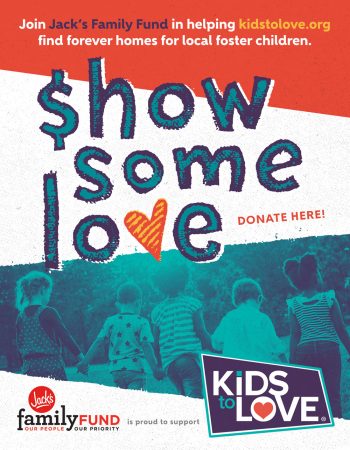 After nearly 60 years of charitable commitment to the communities it serves, Jack’s Restaurants has launched its own separate non-profit foundation to continue its longtime commitment to community support. The Jack’s Family Foundation kicked off with the annual eight-week “Show Some Love” campaign in Jack’s Restaurants. The campaign featured a number of events, including car washes, spirit nights, and motorcycle rides to collect donations.

In the last two years, the campaign raised $178,000 and $157,000, respectively. This year, Jack’s Restaurants surpassed those numbers by a wide margin, as customers and employees in 157 stores raised $217,000 – the most Jack’s Restaurants has ever raised in a single philanthropic effort. Proceeds from the campaign, which ran from August 8 to September 25, will benefit Kids to Love, a Huntsville organization dedicated to helping Alabama children in foster care.

Jack’s has been working with Kids to Love for the past eight years; three years ago, Jack’s made Kids to Love their annual companywide fundraiser.

Jack’s #136 in Red Bay, AL, was the top-performing store in this year’s fundraiser, raising $10,773 throughout the eight-week campaign. Jack’s CEO Todd Bartmess says the Red Bay store is representative of the larger culture at Jack’s Restaurants, where customers and employees alike are dedicated to giving back to their communities:

“At Jack’s, we are privileged to be a part of improving the lives of foster children; one of our Core Values at Jack’s is to be an integral part of the communities where we do business. The Jack’s family – customers and team members alike – were passionate about doing their best to help out, and we are proud to partner with Kids to Love.”

“We love how Jack’s loves our kids!” says Lee Marshall, founder and CEO of Kids to Love. “This partnership is an amazing support for our programs that directly impact the kids we serve in foster care. The Jack’s employees are amazing ambassadors for Kids to Love.”

On October 17 at 1:00 p.m. at Davidson Farms, Kids to Love will receive a $217,000 check from Michael Greco, Chairman of the Board of Jack’s Family Fund, and Christy Malone, Jack’s Restaurants Brand Manager. For more information, or to cover this event, contact Christy Malone at 205.201.7809 or cmalone@eatatjacks.com.

Every dollar makes a difference. Partner with the Jack’s Family Fund to start making a difference in our communities today!